Moving north from Iran lies the region of Central Asia, with countries such as Turkmenistan, Uzbekistan and Kazakhstan offering a glimpse into another world. Renowned for their expertise on horseback, youngsters are proficient in the saddle before the age of 5.

For a longer trip into the region, you can combine a visit around Turkmenistan and Uzbekistan with travels from Armenia, Azerbaijan and Iran moving on to finish finally in Beijing.

A much longer expedition, starting in Istanbul and finishing in Beijing, takes around 16 weeks to complete, travelling by truck to see parts of the countries that standard tourist trips don’t visit promises to deliver memories you will never forget.

A wonderful contradiction of opulence and desolation, Turkmenistan is a country of people who love to extend a warm welcome to visitors.

More than 80% of the country is covered by the scorching Karakum Desert, with undulating sand dunes and blistering temperatures making Turkmenistan the hottest place in Asia. However, in the winter months, it can be freezing, with temperatures plunging to arctic levels.

A view from the Karakum Desert, Turkmenistan

Despite the heat, it’s a good idea to keep shoulders and knees covered in Turkmenistan, particularly when visiting memorials or places of worship to prevent unintentional offence.

Because Turkmenistan is such a hot country and the terrain unforgiving in parts, there are far lower levels of tourism than elsewhere in the area. This means it’s possible to enjoy some of the fascinating attractions without the crowds.

Ashgabat is the capital city and in stark contrast to many of the more traditional areas. Destroyed by an earthquake in 1948, the current city’s architecture only dates back less than 70 years. Some of the monuments are simply spectacular, such as the Arch of Neutrality, a 75 metre memorial which features a 12 metre spinning statue of the late President Niyazov.

Bakharden lies 90 kilometres west of Ashgabat and offers visitors the chance to bathe in a hot mineral lake known as Father of Lakes (Kov Ata), remaining at a balmy 37°C all year round.

But for a really stunning phenomenon, the Doors to Hell in Darvaza are worth a trip. Not exactly a natural occurrence, this fascinating sight was caused by a drilling mishap which created a giant hole in the desert. In a bid to get rid of the potentially dangerous natural gases, the hole was ignited…but the fire has remained alight for the last 40 years. 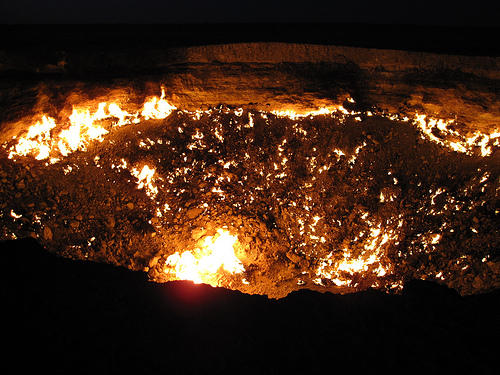 For a slighter calmer look at the Turkmenistan landscape, Chuli offers a mountain resort with stunning alpine views and a scenic gorge. There’s accommodation available on location and visitors who are fit enough can go climbing or hiking.

Throughout the whole country, there are lots of opportunities to see the landscape from horseback, a truly unique chance. This method of transport is central to the Turkmenistan way of life, with an old folk saying advising, ‘Get up in the morning, greet your father and then see your horse’.

The legendary trade route, The Silk Road, which also winds its way round Iran can be followed through the exotic landscape of Uzbekistan.

With stunning mountain ranges, bustling bazaars, narrow twisting alleys and ancient architecture there are endless delights waiting to be discovered in Uzbekistan.

Described as a museum under the sky, Khiva is a city which offers the historical significance of sites such as Pompeii whilst still remaining alive and kicking. At least 2500 years old, proven by archaeological digs, UNESCO have declared Khiva to be a city reserve, with the innermost region of Ichan-Kala deemed to be a historical site of world importance.

A medieval city at its core, the architecture is classically eastern with coloured brickwork and intricate carved pillars. Holy sites are of special importance in Khiva and many are still popular with visitors today.

The memorial to Pakhlavan Makhmud, one of the famous philosophers and poets from the region, is particularly spectacular with summer and winter mosques attached to his burial place, as well as a special room dedicated to the reading of the Koran.

Fergana Valley is one of the most fertile and also affluent areas in Uzbekistan and is often dubbed as the ‘pearl of Central Asia’. With nearby settlements famous for silk fabrics, its woven material and ceramics, local crafts and handiworks from this region are highly prized.

No visit to Uzbekistan would be complete without seeing the sights of Samarkand, arguably one of the most lavish and magnificent parts of the country. Known as the ‘Jewel of Islam’ and ‘The Mirror of the World’, the main attraction is the Registan Square. A place used for mass trade, and in the past public executions, Registan Square is framed by three madrasahs, Islamic schools, which are stunning examples of traditional Uzbekistan architecture. 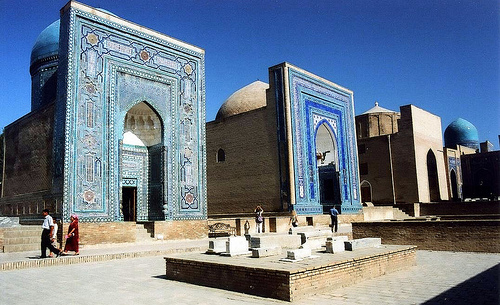 Although the landscape is filled with arid desert, there are snowy pistes in Beledrsay and Chimgan and the tropical temperatures mean that there are plenty of exotic fruits and vegetables grown, such as huge, sweet melons.

But it’s not just natural occurrences that make the panorama so interesting. Hiring a hiking guide and setting out for a walk, you may come across rock carvings. Uzbekistan is known to have some of the most numerous rock carvings in the world dating from the Mesolithic Age. More than 150 separate sites have been identified in Uzbekistan, with a large number of them clustered around the mountain areas. Viewing these snapshots of ancient art which still has the expert puzzled over their origin is truly a once in a lifetime experience.

Once your time in Uzbekistan has come to an end, if you are moving onto the next leg of the journey, you will exit through into Kazakhstan before moving on to Kyrgyzstan.

With long expeditions such as these it’s possible to pick up the parts of the journey that you want to do, picking the bits that really appeal. Even if you leave at Kazakhstan, you could still re-join later for the final three weeks taking in the Altai Republic, Mongolia and ultimately China .