Moving on from Ethiopia , Sudan and the final destination, Egypt, are next on the list.

The last leg of the 7 week journey, there’s still much to see and do, from displays of native wrestling to the beauty of some of the most ancient structures in the world.

Like everywhere in Africa, many places are surrounded by wildlife and as you continue your overland journey, you can expect to see many animals along the way.

The capital of Sudan, Khartoum is a city divided into three, split by the convergence of the two arms of the Nile: the Blue Nile and the White Nile.

The city is also divided by distinct functions with the central region acting as the municipal seat containing all the administration, and Bari (one of the three main districts) mainly industrial. Omdurman, the third arm, has a distinctly middle-eastern feel, although the Souq Omdurman – one of the largest markets on the continent – has far more of an African vibe. 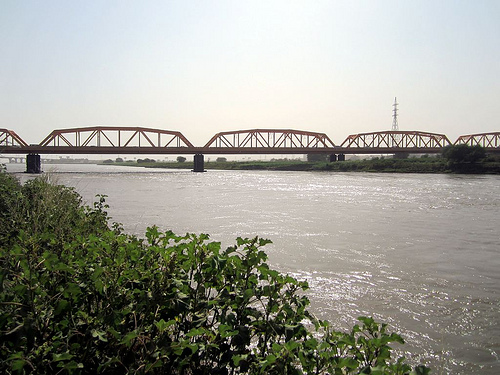 Visitors spending any time in Omdurman should try to experience the Sufi dancing, held every Friday night. Also known as the whirling dervishes, the sight is quite simply breath-taking and a huge hit with both locals and tourists every week. Photographs are permitted but you’ll need a good lens to capture the action!

Although Bahri is primarily industrial, it also holds its own brand of entertainment Sudanese-style for visitors to enjoy. Lasting around two hours and also held on Fridays, but slightly earlier at 4pm, Nuba wrestlers fight in front of enthusiastic crowds. A traditional form of cultural entertainment, the purpose is to slam your opponent to the ground with no chance of submission.

Lying north of the city of Khartoum, the Bayuda Desert offers an intriguing landscape to explore, with far more contrasting terrain and wildlife to discover than you may first think.

The rock formations are starkly beautiful, carved from black volcanic ash and silhouette perfectly against the endless golden sands of the desert floor. However you’ll also find savanna plains, lush green ravines and pockets of forest.

The Bedouin people call the Bayuda Desert their home, known as a nomadic tribe which wander freely from one location to the next. However not all Bedouin are nomadic, the Bisharin – a sub division of the Bedouin people – remain in one place and many have settled along the banks of the Nile itself.

Driving across the Bayuda Desert is a breath-taking experience; the sky opens up in a way not seen elsewhere and the horizon seems to let more light fill the air. Despite this beauty, the desert is not a place you will want to inadvertently break down in and your guide will be pushing on to the next location on the list.

The southern city of Egypt, Aswan has a distinctly African atmosphere and the pace of life is relaxed and calm. A small and intimate location, there’s lots of places to sit back and watch the Nile gently meander by, with the waters here calm and clear.

The ancient marketplace is full of spice and aromatic perfumes, with scarves and baskets also on display. In the evening you could enjoy a meal on one of the floating restaurants or watch some local performers re-enact mock stick-fight dances or play out village life scenes.

But there are too many places of interest to see, and activities to enjoy sitting around for too long. Elephantine Island is the most ancient of the isles in Aswan and contains valuable artefacts which go back to the predynastic period. The island is thought to have gotten its name partly due to the large boulders which are in the water just off the shore, which from a distance look like bathing elephants. 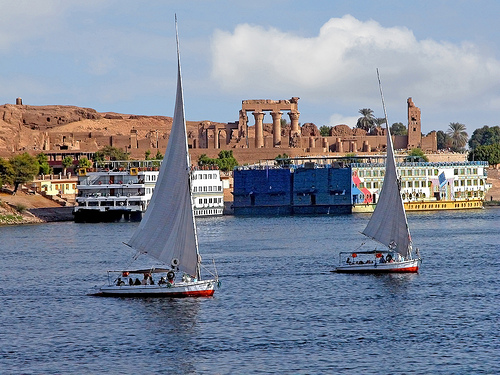 Just outside Aswan is the Tomb of Aga Khan, a stunningly beautiful piece of architecture thanks to its simple design. Although visitors can no longer go inside, the site is worth a visit, not least because of the man himself. Plus it is in close proximity to The Monastery of St Simeon so a combined trip can be easily arranged.  The latter dates back to the 6th or 7th century, and was one of the largest Coptic monasteries in Egypt. Experts believe it would have held thousands of residents within its walls. The mud and brick layers on the upper walls have largely vanished but the stonework on the lower levers is still solidly intact. With thick-walled towers, arches and some Coptic wall paintings still in existence, the site is a fascinating discovery.

Valley of the Kings

The regally named Valley of the Kings is actually the burial ground of many of the pharaohs which made up the 18th to 20th dynasties. With the famous Tutankhamen amongst the 63 royal tombs, as well as Ramses V and VI, visitors can purchase a ticket which permits entry to three separate mausoleums.

With paintings on the walls and ancient hieroglyphics, you will become absorbed by the world of Egyptian pharaohs and their fate. Enchanting and magical, not all of the tombs will be constantly open, but each and every one has a story to tell with amazing murals and frescoes within.

A slightly spooky and unsettling excursion, it’s nonetheless one that you really won’t want to miss. 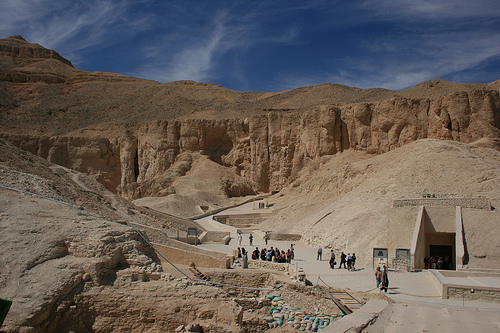 Don’t forget a trip to the Valley of the Kings

Once you finally arrive in Cairo, the last destination on your tour, the undoubted highlight will be the trip to see the Great Pyramids. More than 450 feet high and comprising of 2,300,000 separate blocks of stone, the work involved to create the Great Pyramids in ancient times is quite simply mind-boggling.

There are more than 100 pyramids in Egypt but the Great Pyramids are easily the most impressive. You may be able to enter one of these ancient tombs during your visit but tickets are heavily limited and if you don’t get there early, you’ll have no change of getting in.

Whilst you are visiting the Pyramids, you will want to keep a lookout for the Sphinx too, a huge carved head which keeps watch over Khafra’s pyramid. There are many legends which surround the Sphinx including suggestions that there’s a maze of hidden tunnels secreted beneath his huge paws.

Although this expedition may have finished there’s other tours around Africa you could enjoy .  Starting in the same location, Nairobi you cross the border to see the gorillas in Uganda before making your way to finish in Cape Town, South Africa. You can also follow the route in reverse, beginning in South Africa and following the same path backwards, finishing in Nairobi.

Every country in Africa has a different story to tell and promises adventure, thrills and memories guaranteed to last a lifetime.