A five week trek through some of the most fascinating and beautiful countries in Asia. The Bishkek to Beijing is guaranteed to create memories that last a lifetime.

Starting in the spectacular mountainous and grassland regions of Kyrgyzstan and Kazakhstan. The expedition moves through the deep forests of Altai Republic and onto the deserts of Mongolia. The trip finishes in Beijing, experiencing some of China’s greatest sights en route.

The different landscapes, people and cultures  on the way ensure the trip will be unlike another you have ever experienced.

Formerly part of the Soviet Union, Kyrgyzstan offers a tranquil and spectacular escape from the hustle bustle of everyday life. With clear alpine lakes, grassy plains and high mountain passes, you’ll begin your expedition by camping with the locals in their yurts.

Unlike crowded western countries, Kyrgyzstan has a population of just five million spread out over a region the size of England. guaranteeing plenty of peace and quiet.

During the first week in Kyrgyzstan, the expedition will visit Ala Archa National Park. It’s set high up in the Tian Shan Mountains, also known as the Celestial Mountains. Open all year, it offers many activities including climbing, skiing, and wild-life spotting. Keep an eye out for the elusive snow leopard. 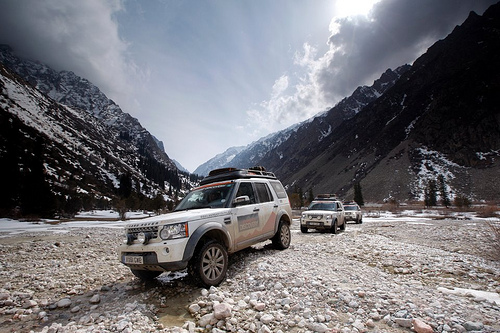 An area of stunning natural beauty. There’s 50 mountain peaks and 20 glaciers in the Park, along with wooded glens and waterfalls.

For those who enjoy learning about local culture, the Archa is the tree that provided the name for the park, and which can be easily found. Brightly coloured juniper, which Kyrgyz people traditionally burned its wood to scare off demons and evil spirits. Local beliefs dictate that it must not be allowed to grow too close to the home, because it takes the life force of any humans living nearby.

Once you’ve finished your trip through Kyrgyzstan, it’s time to move onto Kazakhstan.

A landlocked country with its feet in two continents, Kazakhstan is a compelling fusion between many cultures. Traditionally a country of nomadic tribes, there’s a multitude of landscapes to enjoy: deep forests, snow-capped mountains, clear fresh rivers and deserts.

The route through the country will include Astana, the second oldest capital city in the world. Here the magnificence of old Russian architecture can still be found amongst the sleek new modern buildings. Russian influence and atmosphere is quickly being eroded, so savour the experience,  it may not be the same if you return. 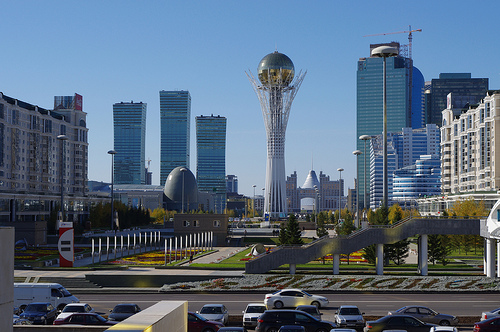 Moving on from the city, ready to journey on towards Russian Siberia, the alpine scenery that you will travel through is simply stunning. With rivers flowing down from the mountains of China. You will experience the Central Highlands and the desolation of the Asian steppe before crossing over into the Altai Republic.

A federal subject of Russian Siberia, it’s difficult to conceive the sheer size of the Altai Republic without seeing it for yourself.

Siberia itself covers 10% of the Earth’s surface, and includes deep permafrost, which doesn’t  thaw, even in the summer months.

The southern part of Siberia, the Altai Republic enjoys a more temperate climate, including warm pleasant summers. However, during the winter months the temperature can still plunge to 30 below freezing. Here the right type of clothing is absolutely essential to stay safe and warm.

The many crystal clear lakes will be icy cold so if you want a slightly warmer dip. Why not visit one of the many hot springs which are rumoured to reinvigorate and renew!

The indigenous people of the Altai Republic believe that their land is sacred and the many standing stones are special instruments which direct the cosmic flow of energy.

With many tiny scattered villages, you will encounter sheep and yak herders, with the locals renowned for their skills on horseback. A simple and uncomplicated lifestyle, you will be guaranteed a warm welcome by these friendly folk.

A very special country, it’s impossible not to be enchanted by the spirituality of the region and its people. With Tibetan Buddhist nomads wandering the plains of the Gobi Desert, you will find a way of life never before seen.

The local food is simple but delicious; try lapsha and buuz for a combination of Russian and Chinese dumplings and noodles. If you are feeling really brave you could also try the much-loved delicacies of fermented yak’s milk yoghurt or yak butter tea.

Away from the Gobi Desert and desolation of the wilderness, the capital city of Ulan Bator offers an intriguing insight into the empire Mongolia was during its great past. Originally built as a Buddhist monastic centre, today it is the thriving heart of the country.

Ulan Bator has many of the great architectural buildings of the past; the Winter Palace of the Bogd Khan, a previous imperial residence. With six temples still standing, the palace now serves as a permanent memorial to the last monarch and his wife. 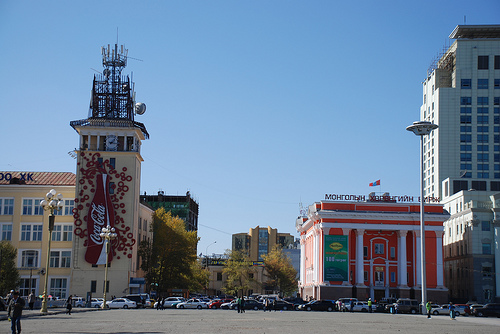 The earliest surviving monastery in Mongolia is not located in the capital, but in the Övörkhangai Province. The Erdene Zuu Monastery was built in the 16th century on orders from the then ruler. After a meeting with the Dalai Lama, which resulted in Tibetan Buddhism being declared as the national religion.

Despite experiencing many changes and struggles over the years, Erdene Zuu remains to this day an active monastery and museum.

For more trips to historic Buddhist monasteries, the Turkey to Iran route offers some incredible sights.

Moving away from civilisation and back into the Gobi Desert. The final leg of the journey crossed the border into Inner Mongolia, a region technically part of China.

En route to Beijing, the Great Wall of China is an essential visit, an awe-inspiring construction;  parts of this were built as early as the 7th century, although much of what you will see was rebuilt during the Ming era.

With watchtowers, steep inclines and battlements, the sheer scale of the Wall is difficult to appreciate until you are up close.

Once you reach Beijing, the Forbidden City is a must-see for any visitor. Housing the imperial palace for nearly five centuries. The City stretches over 180 acres and includes 980 traditional Chinese structures.

Surrounded by an eight metre high wall, and a 52 metre wide moat, the Forbidden City remains elusive and mysterious. Accessible only via Tiananmen Square, the approach allows the magnificence of the Forbidden City to be viewed in all its beauty.

Crossing the dramatic deserts, mountains and lakes of Kyrgyzstan, Kazakhstan, Altai Republic, Mongolia and China provides a wonderful insight into the Russian and Asian cultures of these countries.

If you enjoyed your time in the magical Asian continent, there are many other tours to enjoy. The Istanbul to Peking route provides yet another glimpse at the fascinating Chinese capital. While the Turkmenistan to Kazakhstan offers another look at the raw beauty of the natural landscapes.

The chance to experience different cultures and countries, the Kyrgyzstan to China tour is simply unforgettable.