There are a number of tours around Africa but the Nairobi to Cairo route isn’t one for the faint-hearted.

Following remote roads and accessing areas with little or no communication to the outside world, the expedition is a real adventure where literally anything can happen along the way. The terrain is rough and unpredictable and you might need to lend a helping hand if things don’t go quite to plan. The trip could well over-run or the route itself might have to be changed due to volatile politics, the weather, road closures or visa problems. Whatever happens, it’s all part of the experience.

Travelling more than 6000 km overland, you’ll be moving through some of the most incredible landscapes in Africa, with deserts, rivers, savannah and mountains all along the route. Everyone will need to take their turn cooking and collecting firewood, and you’ll rise and sleep with the sun. Offering the chance to experience a different way of life just for a few weeks, the Nairobi to Cairo tour will change the way you look at the world forever.

A contemporary and cosmopolitan city, Addis Ababa is one of the fastest moving cities in the entire continent. Proud of its African roots but not afraid to embrace new cultures and ideas too, Addis Ababa has a reputation for being fashionable and forward thinking, with a rich tapestry of sights, sounds and experiences waiting for residents and visitors alike.

Bole Road hooks up the airport directly to the city centre and coincides with the part of the city which is particularly hip and trendy, with bars, restaurants and clubs open to dance through the night. 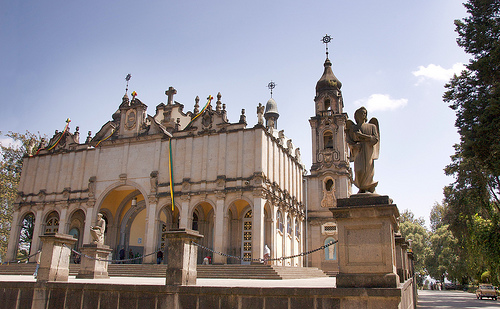 But it’s not all about shopping and entertainment, Addis Ababa has a varied and complex history of which it is understandably proud. The National Museum has a number of fine artefacts which help to provide valuable clues to the past of Ethiopia, as well as Lucy, the oldest hominoid which has ever been found in the world.

Lying atop the Abyssinian plateau, Addis Ababa reaches the giddy heights of 2400 metres above sea level, and is officially classed as ‘tropical highland’. This means a balmy climate and never-ending blue skies, the perfect combination.

The biggest lake in the whole of Ethiopia, Lake Tana is the source of the powerful Blue Nile, feeding it at source before it twists and turns its way up to meet the White Nile and pours into Egypt.

Around 84 km long and 15 metres deep, Lake Tana features 37 secretive islands dotted around its surface, many of which contain ancient hidden churches and monasteries away from prying eyes. Because of their relative security, these islands retreats were often used to store religious relics and items of value, as they were deemed safe from thieves and vandals. 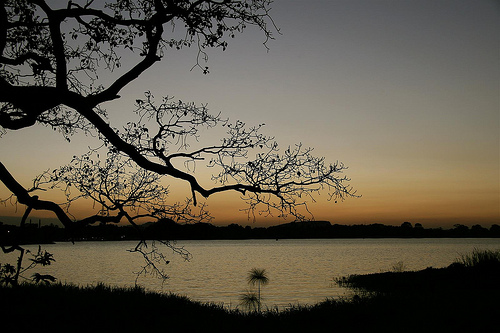 Lake Tana – a great place to visit in Ethiopia

It’s possible to take a boat trip around the surface of Lake Tana, and in some cases you may be able to stop off to visit some of the many monasteries and islands. Locals still traverse the water using more traditional means such as tankwas, boats made from papyrus reeds which were also used by the ancient Pharaohs.

Moving slightly away from Lake Tana, the water sent flowing down the Blue Nile reaches a dramatic conclusion 30 km away from the village. The Blue Nile Falls reaches four hundred metres wide during the flooding season and sends a curtain of water spilling down a 45 metre drop. The thunderous roar of the waters can be heard for many miles around, and the constant spray in the air has helped create a permanent glimmering rainbow effect.

A regal city, Gondar was the home of many princesses and emperors who previously ruled the country, dating all the way back to the 12th century.

Also known as Gonder, the town is often described as the Camelot of Ethiopia and it’s not hard to see why. The castles and buildings have a distinctly European influence, whilst other parts of them are clearly African in origin. The end result is a unique appearance which is quaint yet opulent too.

Some of the churches in the town are quite simply spectacular with stunning paintings, murals and frescoes, showcasing some of the artwork which was created many centuries ago. Legend is divided over the origins of many buildings and artefacts, with some claiming they were created by the Portuguese whiles others suggest they were made by African workers instead.

Ethiopia has one of the most spectacular landscapes in not just Africa, but the world, with jagged mountain ranges, plunging valleys and steep precipices. With harsh rock, soft sandy savannahs and lush wooded areas, the terrain is different almost around every turn. 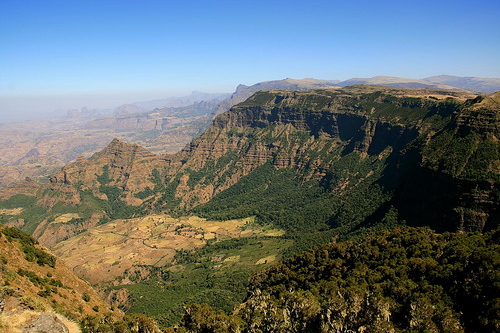 However, the gelada monkeys are amongst the most famous inhabitants of the Simien Mountains and are renowned for their placid and friendly nature. Hanging out in large groups of around 50 monkeys, they are playful without being aggressive and you can spend lots of time with them, sticking just a couple of metres away.

High up in the mountains, the weather can be somewhat unpredictable but even if you aren’t lucky enough to be able to enjoy the panoramic views, the chance to spend quality time with a group of wild animals should more than make up for the loss.

After five jam packed weeks of watching crocodiles resting on the banks of the Nile, horse trekking and climbing mountains, the time in Ethiopia draws to a close.

If you want to see more of the region, you could join the East Africa expedition which starts out in Nairobi  and moves through many of the neighbouring countries such as Uganda, Botswana and Namibia.

But if you’re staying with this expedition, it’s time to move onto the next leg, starting in Sudan before travelling up to Cairo.