Santa visited the campsite on Christmas Eve and left us packages with labelled pegs filled with lollies; a lovely surprise to wake up to; he also left behind some ingenious Christmas decorations, thanks Santa! 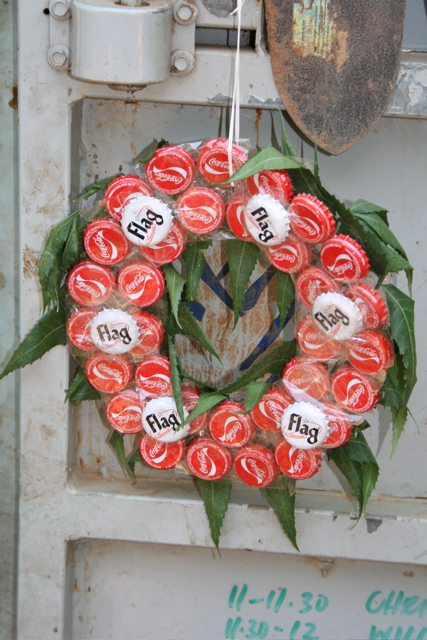 Hung-over heads on Christmas day, Mark was up early putting one of the a pig roast on the fire.

Heads were cleared by a large cooked breakfast, which was leisurely prepared and ready for lunchtime.  The drinking started early and more food followed some Horderves  of crostini hummus and salsa, thanks to Rebecca and Dave for crushing the chickpeas with a garlic crusher. 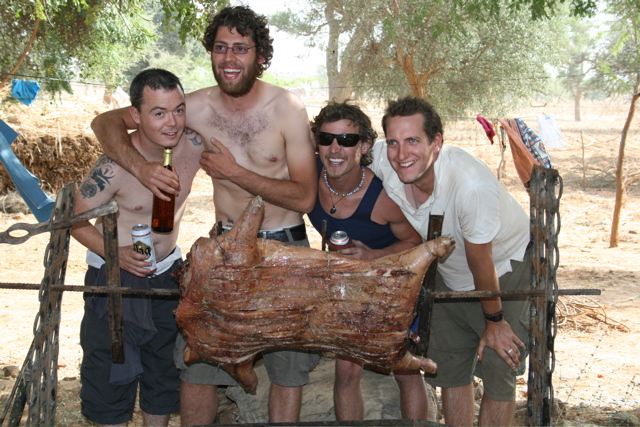 Pig roast on the fire

Secret Santa made an appearance in the afternoon, and everyone was well impressed with their gifts especially Mark who got to sing a Roxette solo, and also Daisuke who is still wearing his new T-Shirt.  Other big players for gifts were cigarettes, alcohol, chocolate and slingshots along with a headband and braid set (which was for a boy), an African club, a Dogon hat, shirts, headscarfs, jewellery and herbal Viagra. 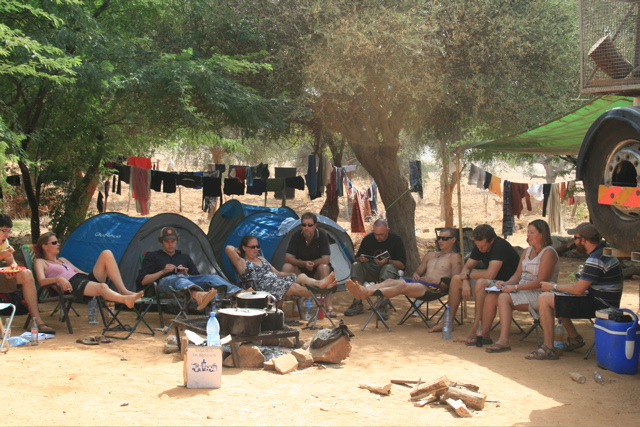 Relaxing around the camp

Christmas was celebrated here much like it is at home with too much food, and too much alcohol.  Thank you to our ingenious wedding planner who made the most of what she could get and decorated our Christmas dinner table.

Boxing Day was a very quiet day sat around the truck doing English pub quizzes for about 6 hours, and eating the leftovers.  Eating the leftovers that had been left in the sun for the day may have not been the right thing to do, with all but 2 people getting sick over the next 2 weeks.  We well and truly overate pork, finishing it off with sweet and sour pork for dinner. 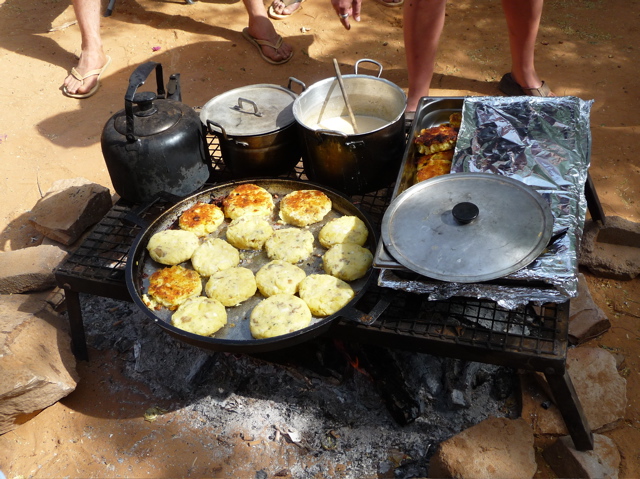 Buns cooking on an open fire

From Bandiagara we made our way to Burkina Faso, where we all turned a tinge of red from the red dust, especially Walter whose white beard turned ginger.

It was a fleeting visit to Burkina Faso, three nights four days.  Both border crossings were painless and quite fast which was a nice change.  Ouagadougou the Capital, is a great name to say, ( Wog-a-do-do?) and a fine modern city, where we enjoyed some air-conditioning, and caught up with administration jobs, and found pizza and a western supermarket with real cheese. 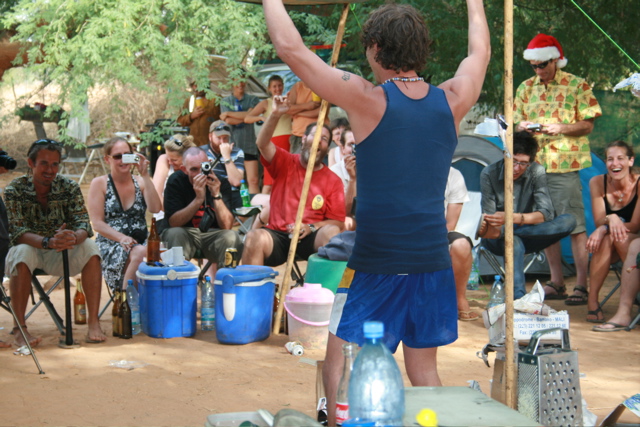 Burkina Faso is also a great clothes-shopping country, with people restocking their bags with new clothes, after discovering that white clothes don’t remain white out here.  So more white clothes were brought and we now have professional footballers and fishermen on the trip.

All and all Burkina Faso seemed like a really nice country with really nice people, clean, the majority of the buildings in the villages were made of mud and straw and just so beautiful.

There were obvious changes as we crossed the border into Ghana, and we were all able to converse with the locals and read the signs along the road, with the official language being English.  There were also physical changes in the people becoming much wider and bigger. English breakfasts perhaps…

Our first stop was Tamale, where we discovered plastic bags of ice cream and water.  Grins came across Chesley and Amy’s faces as they went from store to store buying out Savannahs (South African Cider).  We were also enlightened about Ghanaian toilets which are generally long drops with no doors which when you pay you get a sheet of newspaper.

From Tamale we headed straight to Mole Game Reserve, and went on our worst road yet, travelling 80 kms in 4 ½ of continuous ruts and potholes.  On arriving we quickly started celebrating New Years Eve, and headed to the hotel bar where there was a DJ set up that was playing extremely loud distorted music.

Warthogs joined us for dinner, and drunk from the washbowls. Ciara had a dance off with one of the guys at the bar that lasted 40 minutes and most people jumped in the pool at midnight, celebrations didn’t go too early into the morning with the bar closing early, but were picked up again the following day after a great cooked breakfast to start the year off. 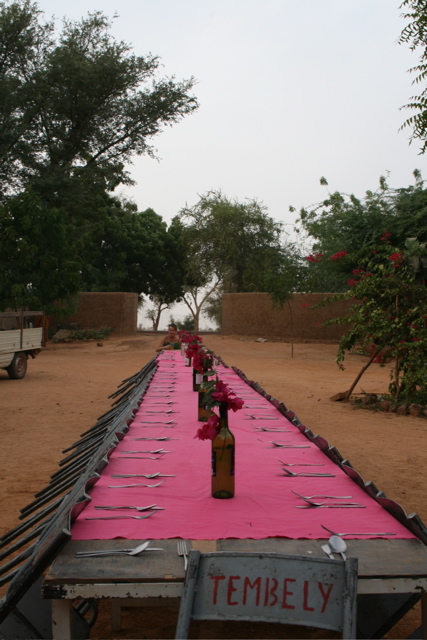 We ended up staying in Mole for 3 nights.  Some people dropped down in the reserve and went for game walks, but the majority enjoyed the park and the views from the cliff edge were the campsite and hotel in set. 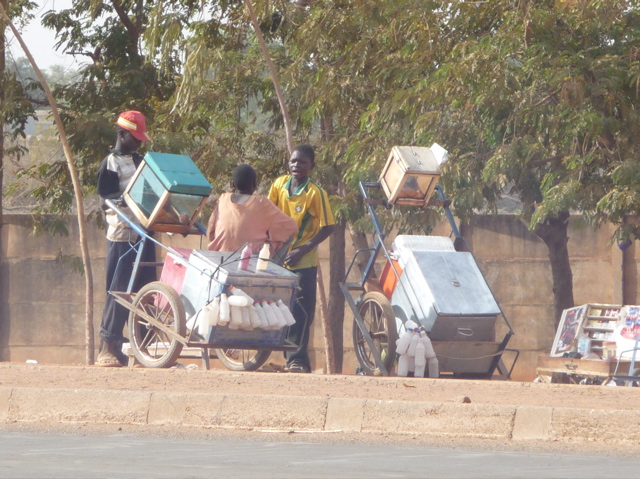 Baboons that stole bread and Laughing Cow cheese broke into ruby, and elephant also came to visit the campsite.

From Mole we headed back along the great road and started making our way towards Kintampo Waterfall where we camped for the night.  Humidity started to get mixed in with the heat, and the waterfall was a nice relief. From Kintampo we made our way to the crazy market town of Kumasi, which used to be the capital of Ghana. It has the largest markets of West Africa. 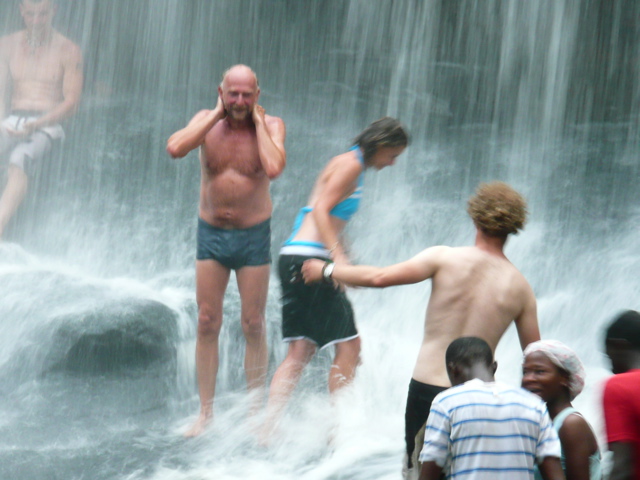 …and the waterfall was a great relief

The markets of Kumasi is a maze of craziness, with ridiculous amounts of people buying and selling pretty much everything that you can think off.  Renier and Rebecca bravely tried the tourist meal of Cane Rat, which is apparently very tasty, the rest decided to take their word for it.

We also got our first rain of the trip with a good tropical storm coming through, which was a welcome relief to the humidity.

Ruby’s horn got upgraded to an air horn; with the car horn she had not really cutting it with the crazy drivers in Ghana. 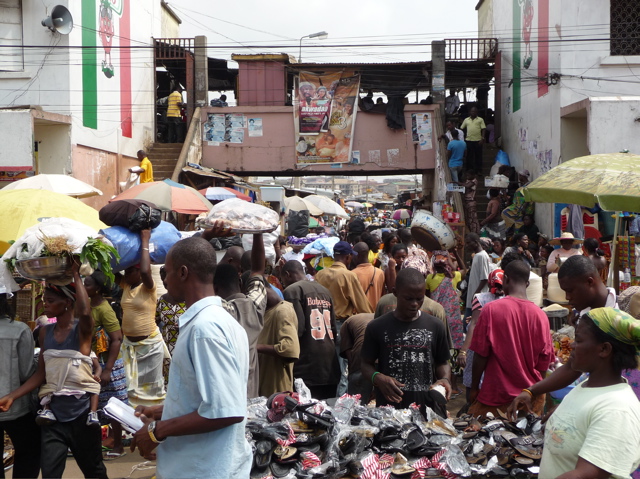 Was an early morning leaving Kumasi for Accra, to start another visa hunting adventure.  We were hoping for Angolan, Togo and Benin Visas while being here, but have only been successful with Togo and Benin.  The drive from Kumasi to Accra was a very long and tiring day, and the scene was soon set after we set off seeing large amounts of crashed vehicles along the sides of the roads, it wasn’t long before we saw a truck roll over beside us, which was extremely scary and eye opening to all, and left us feeling nauseous for the majority of the day.

We got to Accra and discovered that the Angolan Embassy is only open for 3 hours a day and we would have to come back the following day.  We started making our way to the beach, which involved a large detour through peak hour traffic and resulted in a 14-hour drive day, our longest yet. 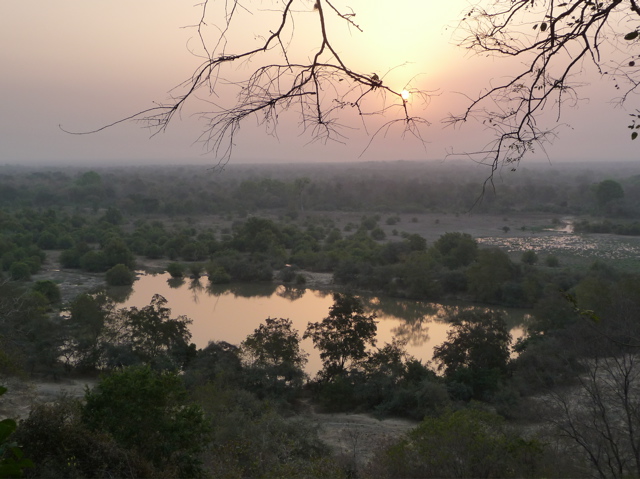 Sunset across the river

We then headed to a South African shopping mall to enjoy air-conditioning for a few hours and stock up on supplies before joining the Accra traffic once again back to the beach.  A 32 km trip from town, without the detour, seems to take an average time of 1 1/2 hours. 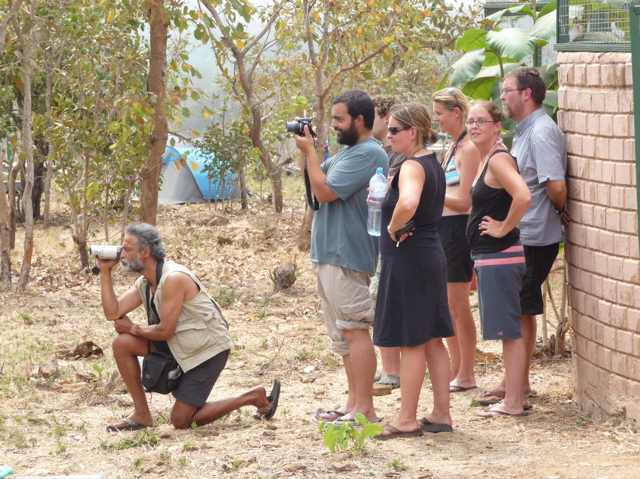 Back to the Angolan Embassy the next day to be told that Angolan visas are only being issued in the country of bordering Angola, we shall keep trying. 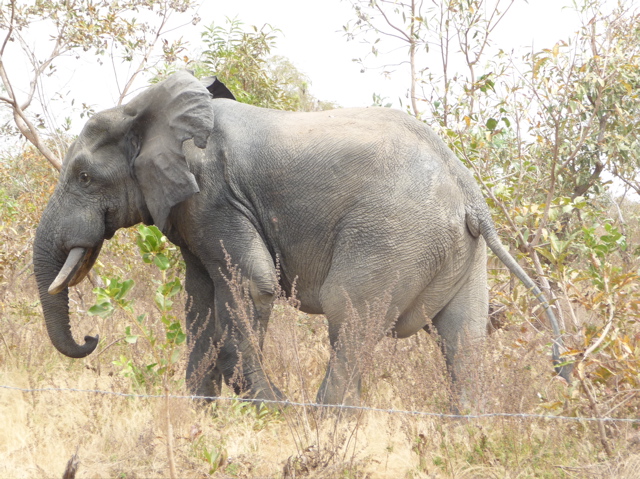 The Elephant we Spotted