Our attempts at getting Angola visas came to nothing, so we hot footed it out of Abuja. The night was spent on the Jos plateau with some amazing scenery. This time of the year the Harmattan winds sweep across northern sub Saharan Africa, consequently the air quality is very poor, so it was a nice change to have a clear night with spectacular star spotting. On to Yankari NP. The morning game drive was rather disappointing but still enjoyed. The highlight was the late morning down at Wikki Wikki warm springs, where a herd of Elephants were at very close quarters. A few run ins with some incredibly resourceful Baboons, had us very wary of leaving a crumb out! They managed to get inside the truck and steal some food not put away, no matter how it was secured. 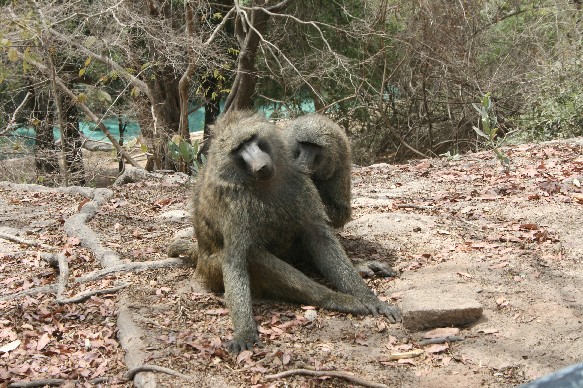 Next came a three day drive to the port city of Calabar. This was an essential stop, as this is the only place to acquire visas for Cameroon. The accommodation there left a lot to the imagination. ‘Paradise city’ was probably a very nice place, about twenty years ago! Run down to the max and rather expensive for its condition, we were very pleased to leave when the visas came through. Whilst waiting, we visited the Calabar Drill ranch. Drills are one of Africa’s most endangered primates. Most are recovered as orphans when their mothers were illegally shot for bush meat, quite a problem in West and Central Africa. Whilst there, an amazing opportunity arose. The need to neuter a female Chimpanzee had arisen (different sub species, restricting the gene pool etc) at the Afi Mountain Wildlife sanctuary. As Denise is a Veterinarian and Jackie is a Gynaecologist, they were asked if they would be willing to perform the operation. They agreed, so after acquiring visas we headed off to Afi Mountain. On the way out of Calabar we had a small nightmare; firstly we suffered a puncture, and then spent almost two hours in a traffic jam! Basically the jam was due to the impatience of Nigerian drivers, one of whom seemed intent on removing the mirrors from our truck! Arriving at Afi Mtn, after some wonderful rainforest roads, we set up camp, and the two Doctors discussed a plan of action. The next morning the patient, ‘Sali’, was darted and brought to the bush theatre for the procedure. I had the fortune of being photographer, so saw all that happened. It went very well, and the staff at the sanctuary were extremely grateful. We stayed long enough to see Sali come around, though still groggy, and then when satisfied that all was well, went on a tour of the ‘Kache Bano canopy walk-a way’. This is a forest walkway, suspended some 40m into the canopy. Amazing, and enjoyed by all. 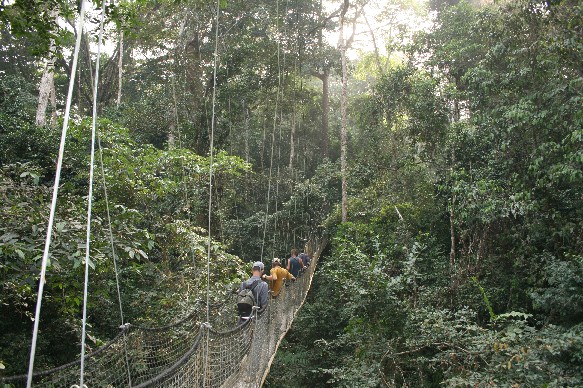 For more information on the work done by Drill ranch and Afi Mtn. wildlife sanctuary, contact Drill Ranch Calabar, H.E.P.O. Box 826, Calabar, Cross River State, Nigeria. Or e-mail: drill@hyperia.com. The afternoon was spent driving from Afi Mtn. to the border with Cameroon. Suddenly the Police stops became a hassle. Previous trips to Nigeria had shown the Police to be very ‘active’ in stopping tourists. Up until now, they had left us alone, so it was a bit annoying to say the least. Eventually we got through the border, after the numerous checks and crossed the bridge into Cameroon, and a whole new world! To say the roads are dreadful is quite simply a gross understatement. Within 5km, we had lost the muffler – crushed beyond recognition, so now we sound like a racing tractor! In all we barely made 15km before pulling over for a bush camp. Next day, in a word, worse. Craters the size of the truck, deviations that were hair raising, and broken down vehicles, one of which we had to repair before we could continue! At least we stopped to do so, most traffic just drove around. One car had three wheels off the ground at one point! Into Mamfe and a lunch stop, and an all too brief flirt with tarmac, then back onto the dirt. 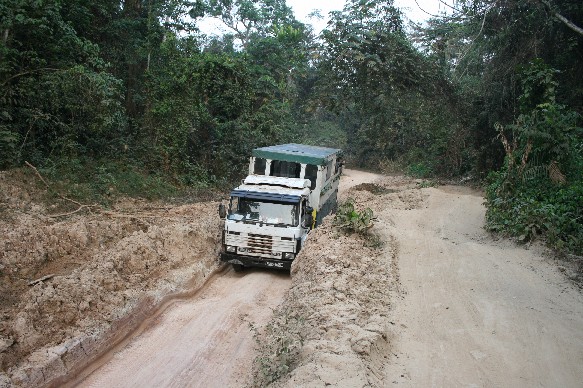 That night we had the most interesting bush camp so far. As we had parked up only 500 m from a village, we had a few visitors. Gary and I went into the village to get some beers, and then almost all of them arrived for an impromptu party! We had the young kids dancing to music from the truck, where Chris was doing a Simon Cowell, and handing out empty water bottles to the best ones. Of course all got one in the end, only fair! We had the adults sampling our food, and they all loved a cup of tea! Eventually they wore us out and everyone went off to bed for a well deserved rest. In the morning the village brought us bread and gave us a very pleasant send off. Welcome to Cameroon! The bad road petered out after 35km, but the scenery continued to amaze us. Sweeping bridges, thick rainforest, vibrant towns and markets, where we became great friends with the locals in no time at all. Mid afternoon, we breezed into Limbe, with Mt. Cameroon in the background. A night on the town was in order and a very pleasant evening was spent in the live music bars.  The next mission was to get to Yaoundé. Firstly we had to pass through the port city of Douala, which amazingly was managed without a hitch, and arrived into the bustling capital. So far we have managed to get Congo and DRC visas. Still awaiting Gabon. Then we have a mad dash to get to Libreville before Monday for the last, but most important visas – Angola. Wish us luck!