Tunisia is a wonderful country in North Africa. Learn more about some of Tunisia’s top attractions through these 7 cultural destinations which have all been added to the UNESCO World Heritage List.

This Amphitheatre was the first site to be added to the UNESCO World Heritage list from Tunisia. Located in the small village of El Jem, the Amphitheatre is the largest Colosseum built in North Africa. Once holding 35,000 people the Amphitheatre is in ruins now, but this still pays testament to the structure which was erected in the 3rd Century. 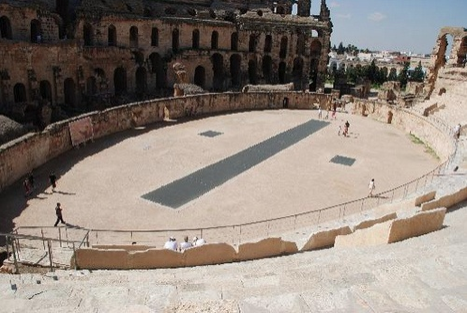 The Amphitheatre at El Jem, Tunisia

This site was huge and the centre of the Ancient Phoenician empire. Established in the 9th Century BC the City was utterly destroyed by the Romans in BC 146 during the Punic wars. Although the Romans set-up their own site on top of the original, much of the ruins of both can be viewed today. A really interesting experience, a trip to Carthage is well worth a trip and could easily last more than one day.

The city of Thugga is another ancient ruin located in the North-west of Tunisia. The city was an important capital in the Libyco-Punic state which thrived under Roman rule but fell into decline in the Byzantine and Islamic periods. The site is well worth a visit and covers 75 hectares in total; it’s well worth a visit to see the development of a city over 17 centuries. Although in ruins, many of the buildings are still clear as to their purpose and the site is important archaeologically speaking.

Kairouan was the capital of Tunisia until the 12th century when Tunis became the state capital. The city is located in the centre of Tunisia and was founded in the 7th century. Two mosques dominate the architectural cultural heritage of the city, the Great Mosque and the Mosque of the Three Gates. Kairouan is a tremendous site and will appeal to visitors who love architectural heritage and religious monuments.

Sousse is a coastal town in the very north of Tunisia, not far from Sicily. Sousse has acted as an important military port for Tunisia due to its strategic position in the country. The town is dominated by Islamic buildings and traditions and is typical of a number in Tunisia. Visitors will observe both Arab and Muslim influences in the architecture and can learn about the naval history of the town and also its vulnerability in previous centuries to piracy. 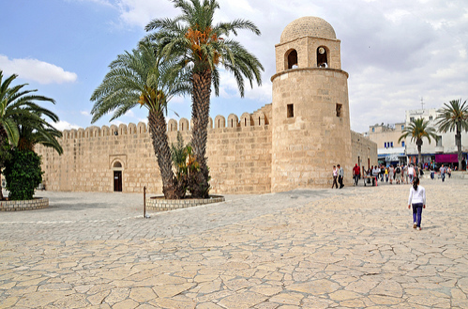 The Great Mosque of Sousse, Tunisia.

Tunis is the modern day capital of Tunisia and has always been an important and dominant city in the Muslim faith. The city is crammed full with Muslim monuments, 700+ and these will take weeks to observe for people wanting to see a variety of architecture Tunis has everything. Established in the 7th century, the city was one of the wealthiest in the world between the 12th and 16th centuries. If you want to see that state capital and all its traditions then Tunis may be the place for you.

Punic Town of Kerkuane and its Necropolis (1985)

Kerkuane is an example of an abandoned Phoenician city. The exact date of abandonment is not known but it is believed to be 250BC, the city remains in ruins but intact as no Roman city was built over the top (like it was in cities like Carthage). The Necropolis of Arg el Ghazouani is about 1 kilometre from the main town and is a classic example of the architecture of the period.

A trip to any of Tunisia’s 7 cultural UNESCO World Heritage sites is an unforgettable once in a lifetime experience. Checkout Thomson sunshine holidays for deals on breaks to Tunisia. Put it on your bucket list and make sure this visit this wondrous country at some point in the near future.